Hey there, friends!  I hope you were able to stop by yesterday and read all about my super-fun birthday excursion with Erin where we tried making fused glass pendants for the first time!

The first type of pendant we made involved using frit, glass that’s finely ground to a sand-like consistency, and creating a design with it inside of a mold.  You can see the frit in some of the jars in the photo below.  The other technique I got to try was called stacking, and you basically build your pendant from the bottom up using different layers of glass pieces, like the ones found in the bins below the jars.

Step 1 involves choosing the base color for your pendant and cutting the size and shape you want.  My choices were clear, white, and black; I chose white.  I wanted to make a rectangle shape, so the owner of the studio showed me how to use this tool, called a scorer.

You hold the scorer straight up and down, place it on your larger piece of glass, then pull it toward yourself to create a little line where you want the glass to be cut.  Then, you use another tool {I believe they’re called running pliers?} that’s coated with rubber and looks like a giant pair of flat nosed pliers.  You line up the center of it with the line you scored, then you give it a squeeze and the glass snaps right along your score.

I spent a considerable amount of time cutting pieces and rejecting them because one or more of the lines wasn’t perfectly straight, until the studio owner came by and asked why I wasn’t using them.  She assured me that when the glass melted it would fix itself because that’s just the way melted glass works.  So, I picked one and moved on.

Step 2 was to choose the other pieces of glass I wanted to layer on top of my base.  I decided to go with various shades of blue and turquoise.  I had several options for types of glass pieces to use.

*Pieces of broken glass – You can use nippers to cut glass like you would for a mosaic, or use scraps others have already cut if you’re visiting a studio like we did.  These come in all kinds of shapes and sizes and colors.  Mine, as you see at the top of this photo look very dark, but will actually melt to show sparkle and glitter!

*Noodles – These look like fettucine to me.  They’re long and flat strips that you can cut or break to the length you want them to be.  You can see an example of this in the bottom of the photo I just showed.

These noodles, placed in a pattern all by themselves, can make really gorgeous pieces…take a look at this plate I found on Pinterest from Idle Creativity!} 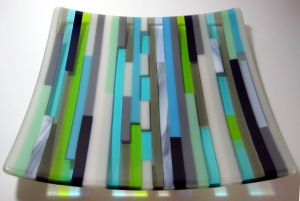 *Stringers – These pieces look and feel just like thin spaghetti to me.  Just like the noodles, you can easily snap them to whatever length you want them to be and create patterns with them.  Here are a few fun examples I found on Pinterest of pendants using a combination of noodles and stringers…see the difference in widths?

*Dots – There are very small dots you can use, just little tiny peg-like cylinders that melt to form polka dots, and larger ones that look more like the glass stones you put in a fish bowl or use as vase filler.  You can use them independently or stack them on top of each other for a layered effect.  Here is an example from gildedlilyglass on Etsy where the two different sizes were stacked; how fun is that?

And here’s one, also from the gildedlilyglass shop that combines dots and stringers!  Love it!

Now I’m really wishing I’d searched Pinterest for inspiration before I got to work!  Ah, well, I guess that just means we’ll have to go again to make some more!

Anyway, once I sorted through all the pieces, it was time to create my design!  The owner told me that while ultimately the glass will fuse together in the kiln, during the design process, you have to adhere it using good old Elmer’s glue.  So, that’s exactly what I did.

Here is a peek at my design before the melting.

The final steps were to bake it in the kiln for 24 hours and then glue on a bail so I can wear it as a pendant!  Here’s the finished product!

Honestly?  If I had it to do over again, I’d tweak my design.  Now that I’ve seen other examples, I would have done a lot more with stringers and dots and not with the big chunks of glass.  They looked so small originally, but since they were so thick {especially the dark ones}, they melted into big blobs and didn’t look quite like I hoped.  Because of that, they also pushed into the stringers and messed up the straight line effect I wanted.  Live and learn, right?  It’s still a fun piece!

This was SO fun to do, and now that I’ve seen so many fun designs on Pinterest, I’m totally itching to go back and design more!  The shop owner also promised that they’re soon getting in some dichroic glass, which is metallic and shiny and sometimes patterned…you can see examples of projects using it on my Pinterest fused glass board.

As far as I can tell, the only down side to all this is that even if you bought all the glass supplies and tools to play around all you wanted, you still need a kiln.  Which ranges from about $370 – $1900.  Ouch.  Fortunately, if you have a studio near you like I do, you can get your glass fusing fix there from time to time.  I *did*, however, find a microwave kiln kit that comes with an insert you use in your actual microwave, along with some other starter things that’s just $112.95…VERY tempting, honestly.

Your information will *never* be shared or sold to a 3rd party.

This site uses Akismet to reduce spam. Learn how your comment data is processed.

Lettered/Doodled Back to School Stickers

Hand Lettering for Everyone

Your information will *never* be shared or sold to a 3rd party.